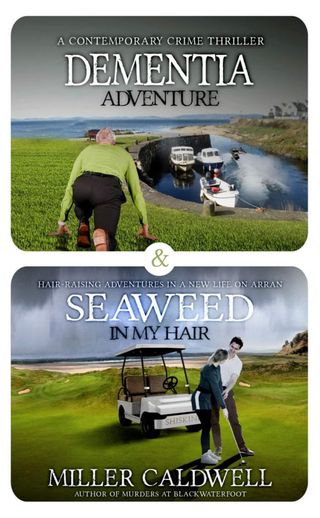 For those keen to see what happens next on the Isle of Arran in Miller Caldwell's successful crime trilogy, we are happy to tell you the wait is over! The following two parts of the trilogy have been published in Omnibus format. The paperback is now available on Amazon, with the Kindle Edition available shortly. The paperback is £10, while the Kindle edition is £3.99.
The blurb on the back reads:

Retired Postman Ronnie Jackson suffers from Dementia. He retains a very early hour of rising and on several occasions sees something suspicious at the Blackwaterfoot slipway. He is not believed. Can Ronnie make sense of what has happened to him and can he settle happily after his traumatic experiences?

"What I liked about the novel Dementia Adventure is that it educates about Dementia and how sufferers live with confused minds. It is also an exciting and adventurous ramble around the Isle of Arran." CYRILL BARNETT

Seaweed In My Hair

Central London gets Kate and Greg Bailey down. The skills of a hair stylist and a health club manager seem transferable to the Scottish Isle of Arran. But the move turns out to be a disaster for them both. As their relationship tears apart, Kate must survive traumatic events. Can she turn her world around on her own? Can she possibly find contentment in her life as the wild sea churns over and the fresh sea breezes blow in her direction?

"A heart-warming story based on lovely Arran." MORAG RITCHIE

Seaweed In My Hair and Dementia Adventure follow Murders At Blackwaterfoot in a trilogy of Arran crime books. All stories feature Sergeant Rory Murdoch, and of course, Blackwaterfoot. Sometimes his territory lacks serious crime but his cases are always challenging.

For details on how to get copies, please check the page in our book directory here.

Miller will also be on Arran shortly with signed copies.