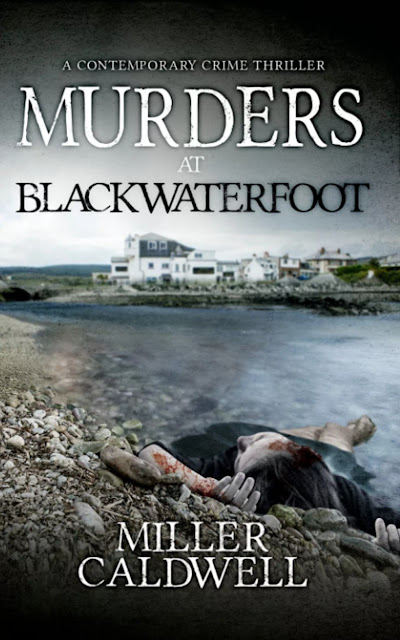 The next set of releases will be uncharted territory for  Beul Aithris, as we debut in crime fiction with a nice 'Tartan Noir' trilogy from prolific author Miller Caldwell. The first release, Murders At Blackwaterfoot, introduces the character of Arran policeman Rory Murdoch.
The blurb for Murders At Blackwaterfoot reads:
Based at Lamlash on Arran, PC Rory Murdoch has a minimal caseload, giving him ample time to think about his daughter, Ella, and her special needs. Then three murders occur in close succession. His supervising officer, mainland-based D.I. Samuel Grant, is not supportive. Can Rory stand up to this bully and undermining superior?

Rory receives a letter from Belgium and Ella has a remarkable insight both of which lead to High Court trials in Ayr. How can Rory cope with three murder trials while his mind is preoccupied on greater matters?

This is a fast-paced story set in the stunningly beautiful island of Arran with elements of humour, pathos, romance and great sadness.

'This was a marvellous story and I even shed a tear or two.' Morag Ritchie

Arran isn't exactly a hot bed of crime? So how did Miller find the inspiration for the trilogy?

"I saw a large bull in the field next to our holiday cottage on Arran. It eyed me and I wondered what its next move would be. It was mine however. The dividing hedge was the issue. On my side was a bushy cotoneaster hedge with only half a top. A bull's neck half, and of course on the field side, it had been nibbled to the bark. I tore off a strip of hedge and waved it in front of the bull. Too late I noticed I was wearing a red jumper. I froze.
The coal black bull approached and with a tongue as long as a child's arm, it took the branch from me and devoured it. Of course it wanted more fodder and I provided several extra portions of the hedge each morning. We became sort of friends, in fact very good friends and I plucked up courage to stroke its neck. On the last day, the bull was already standing with its neck into the garden when I realised it was stamping the soft field with its front left hoof, the sort of matador bull-teasing stamp. I looked over into the field and saw a salmon coloured stone briefly appear. Was it a hand. Was it a body? Well, that inspired the story. But even when I had written it, I realised I had created Constable Rory Murdoch.
Surely there could be other cases for him at Blackwaterfoot? So Murders at Blackwaterfoot is the first of the trilogy of Arran tales. Seaweed in My Hair and Dementia Adventure will follow soon. The size of the island, the Blackwaterfoot characters and the holiday atmosphere helped to concentrate the mind. But as all have serious crime, I had better apologise to the Arran Tourist Board. Holiday bookings in Murderous Blackwaterfoot will be down!"
Murders at Blackwaterfoot will be available on 24 May, while Dementia Adventure and Seaweed In My Hair follows later in the year as an omnibus edition.